The Difference a Year Makes

Yesterday marked one year since Gavin was released from his stint in the ICU and was able to begin the process of recovery. I remember walking beside his bed as we wheeled him back to his old room on 8B, which was packed to the ceiling with toys and gifts from the Gavinator fan-club.  In […]

Gav wasn’t an early walker, but nor was he late.  He took his first solo steps in a hotel room in San Francisco a few weeks after his first birthday. He then spent a long flight to Sydney tottering up and down the aisles of the plane. A few months later, he was walking all […]

Gavin and I, and Bubby and Da went to hospital this afternoon to meet with the neuro-onc team about yesterday’s MRI. I am happy and relieved to report that the scans of his brain and spine came back clear! There is no better feeling than knowing that this cancer has not returned and that I […] 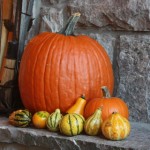 I love autumn. Flaming fall leaves, pumpkin pie, jack-o-lanterns. As blue skies and sunny days give way to chilly nights, we Canadians celebrate Thanksgiving on the second Monday in October. Like our American friends to the south, the holiday is mostly about stuffing ourselves with turkey and potatoes, minus the Pilgrims at Plymouth bit. This […]

I have spent a lot of time over the last year or so contemplating brains. There is something very circular in using the organ that creates thoughts to have thoughts about brains. Just think: these command centres of ours are in our heads, getting feedback from and sending messages to all the trillions of cells […]

It’s Not a Tumour!

Bad Schwarzenegger jokes aside, the good news is that my MRI came back clear. Apparently, my brain looks normal. My spine looks alright too, except for a bulging disc in my back which is causing me absolutely no pain. I see a visit to a chiropractor somewhere in my future. Just glad that it’s not […] 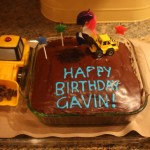 A huge milestone last weekend. On Saturday, September 3rd, Gavin celebrated his champagne birthday and turned 3. To say that we are happy is somewhat of an understatement. I am, as always joyful and grateful for the presence of my little boy in this life. The celebration was quiet and low-key, with just the five […] 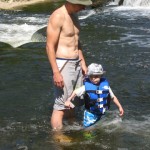 I Love Sleeping in a Tent

Ah, Camping. Waking up to a brilliant sunrise. Finding the perfect marshmallow stick. Swimming in a waterfall. Kicking around fashionably in sandals with socks. Not to mention, reeking of campfire, eating foods which may or may not contain dead bugs, and having to deal with rowdy neighbours who want to part-ay like they were you fifteen years […]