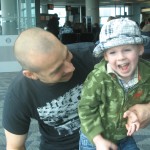 Wikipedia informs me that “deglutition” is the scientific word for swallowing. Huh. You learn something new every day. We had an appointment with the feeding clinic at Bloorview earlier this week, which explains why I’m parsing Wikipedia entries on swallowing and dysphagia. You may remember that Gavin continues to suffer from slight dysphagia. (swallow difficulty.) His last […]

Summer is slipping through my fingers as it always does in Canada. Winter is eternal and the short weeks of summer fly past before you’ve got a chance to breathe. I have not been blogging much of late because we’ve been out enjoying the ridiculously hot weather we’ve been having, and spending a lot of […] 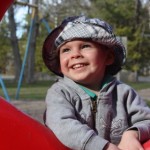 Notice anything different? After over 10 months of tube-feeds, losses, insertions, swallow studies and endless rolls of medical tape, we have come to the end of an era.

As the weeks slip by, we are now beginning to live a somewhat normal life, but also to get a glimpse of what the coming months and years will bring medically. Now we watch, wait and maintain. Gavin is officially out of active treatment and back in the care of the neuro-oncology team. It has […]

Good news.  Yesterday Gavin passed his second feeding study, and is now cleared to eat certain textures!  For the moment we are limited to thin purées and thickened liquids, but we are all ridiculously over the moon about this new development.  Both Craig and I had suspected for some weeks that Gavin was capable of […]

I often ponder the human relationship with food.  Our omnivorous diet is astounding when you think about it. We eat pretty much everything out there, and each culture scorns the dietary choices of other tribes.  (“You eat horse? Eeeew!” “You eat pork? Barf.” etc.) Who was the first person to have a crack at a lobster […]

I’ve come to the conclusion that the human body just can’t sustain any heightened emotion for an extended period of time without trying to return to its normal state.  Fear, anger, pain, grief – these all fade with time because they have to.  Otherwise, we wouldn’t be able to continue to live. We entered the hospital […]