Browse: Home / I Love Sleeping in a Tent

I Love Sleeping in a Tent 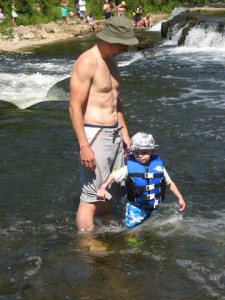 Ah, Camping. Waking up to a brilliant sunrise. Finding the perfect marshmallow stick. Swimming in a waterfall. Kicking around fashionably in sandals with socks. Not to mention, reeking of campfire, eating foods which may or may not contain dead bugs, and having to deal with rowdy neighbours who want to part-ay like they were you fifteen years ago. Like everything in life, highs and lows. 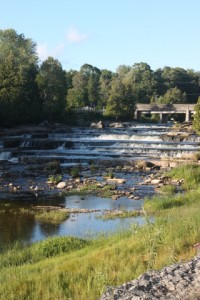 Our two-week tour of southwestern Ontario covered about 800 km and took us meandering through sleepy small towns, farmers’ fields and dark, quiet forests. Gavin stunned us by quietly entertaining himself in the backseat for the duration of these long drives. (With a little help from “Bob the Builder” on DVD) With the car packed to the roof with gear, food and rainy-day entertainments, we headed first to Sauble Falls Provincial Park near Sauble Beach on Lake Huron.

We had the perfect site above the river right next to our good friends Tracy, Hugh and little Jack. Our other friends Tamara, Jeff, Jasmine and baby Ethan were across the way in unfortunate proximity to the above-mentioned rowdies. Lucky for us the sound of the falls drowned out night-time festivities, so we slept in peace. After our first night Bean proclaimed, I love sleeping in a tent.

It was Gavin’s first time away with other kids his age, and it was somewhat like an intriguing social experiment to watch him interact with them. Despite my best efforts, Gav still spends most of his time with adults, and struggles to understand the motives of other children. He constantly comes to me to referee in debates about whose shovel etc. and asks questions like, What are those kids doing? when there’s jumping around and silliness going on. Craig and I had decided to try to give him a little more independence from us, to push him a bit, and to allow him more freedom than he’d been used to. And to encourage some silliness. Of course, it’s hard for me to put these things into practice and allow him out of my sight, even for a moment, but I know that I have to let him go a bit to help him grow.

After a couple of days, Bean had loosened up and decided that he wanted to try to be friends with J & J. Fortunately, both kids are sweet-tempered and easy-going, so we were happy to hear shrieks of glee coming from Jack’s tent as the kids bounced around together in there. It soon became obvious that Gav was quite smitten with his new friend Jasmine. For a little while he took to following her around and just standing awkwardly in front of her to gain her attention. She was pretty oblivious to his affections, but did give him a hug when we said goodbye. The smile! 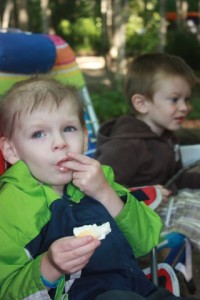 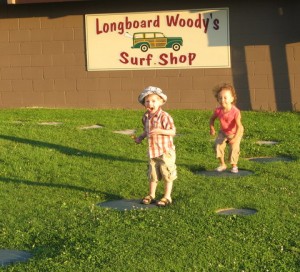 Although the official Sauble Falls park newsletter warned us in no uncertain terms to never, ever, wade or swim in the falls, everyone cheerfully ignored the dire threats of bodily harm and had a blast in the shallow rapids. Bean’s firsts while there included: wielding a paddle in a canoe, walking in a river, going on a hike, wading in a waterfall and roasting marshmallows over the fire. 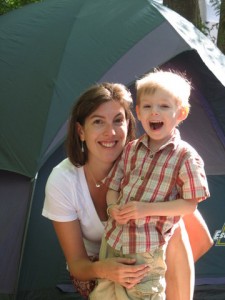 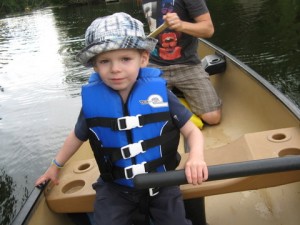 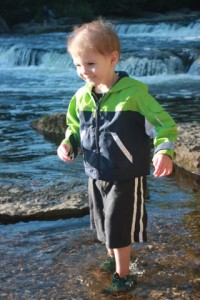 After four nights at Sauble Falls we headed out on our own to Cyprus Lake in the Bruce Peninsula. Cyprus is a shallow, warm lake surrounded by gnarled, mossy forest and our site was gorgeous with a short walk through the woods to the lake and trail leading to “The Grotto.” Somehow, this cave on the Georgian Bay side of the peninsula has become one of the biggest attractions in Ontario and draws thousands of tourists each season. Craig and I have great memories of going scuba-diving there a few years back and were excited to show it to Gav.  Long walks with a (somewhat gross-motor delayed) three-year-old can be a bit of a challenge. Stops and starts. More stops. Wanting to play games. Needing to rest my legs. Taking breaks to eat “little penguin” crackers. The short 2.5 k hike ended up taking us an hour and half, with a few piggy-backs thrown in as well. Everything considered though, he was a little trooper and went from strength to strength as the week went on. 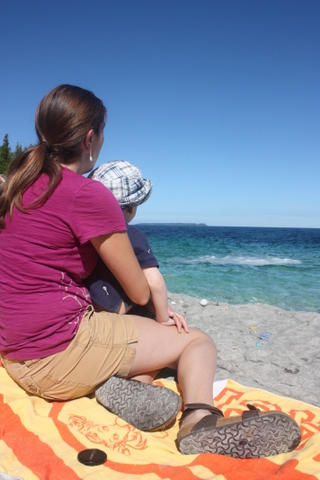 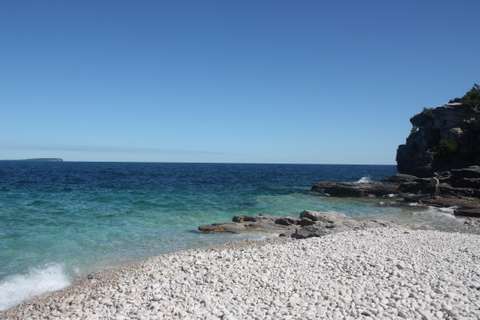 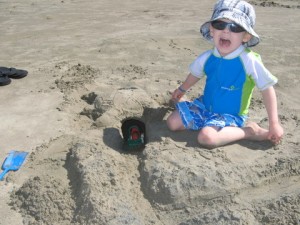 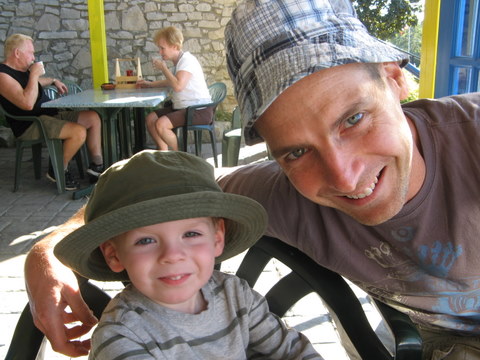 We rounded out our holiday with a quick visit to see friends in Collingwood and a few days spent with Bubby and Da at their cottage. I spent the time being an absent parent while everyone else played with and attended to the Bean. Isn’t that what grandparents are for?

3 responses to “I Love Sleeping in a Tent”