Beanie and I made a little excursion yesterday morning to a local kids’ salon called Melonhead. Yes, it was time to snip those long, lustrous locks.

Gavin has had a difficult time with hair in his short life. He was born with very little of it, and all of that first crop fell out when he was about six weeks old. He was finally starting to sprout some more, when the cradle cap he’d been battling turned into something more like eczema and killed off the second batch, leaving him bald as a new-born at the age of 10 months.

His hair starting coming in properly at around his first birthday, and was long enough by the time he was 20 months old to take him for his first real haircut. Bubby and I took him to Melonhead and made a big production of it. He stayed very still in the orange airplane he chose to sit in and looked to me, at the time, like such a big boy. That was less than a month before diagnosis, and I could not bring myself to look at the pictures from that day until very recently.

Craig and I buzzed his hair short after the first round of chemo, when it started to fall out, and all of it was well and truly gone by the time he began high-dose.

Despite the many months that have passed since the end of treatment, Beanie’s hair has still not grown in again completely. It remains very thin and patchy, so I’m not sure if those little follicles can recover from the beating they took. Every individual is different, and many people complain of the way their hair grows in after chemo, as it’s often darker, wirier, and curlier than before. Gav’s new hair was initially dark , and I remember being kind of alarmed last winter about the amount of hair growing on his face. Luckily, that was a side-effect of the steroids and has now passed. (I know it’s just an aesthetic thing, but still!) Now that summer is here, his hair is lightening up again and he doesn’t look so different from my blonde babe of last year.

Before we left the house yesterday I showed Gav the pictures from his previous haircut and explained where we were going. When we got there, he was very shy of the other children and wanted to be carried. The stylist was careful and relaxed with him. (I’d warned them ahead of time what to expect, as he still has scabs from his last surgery.) Beanie weighed up the vehicle options and again went for the orange airplane. I was a wee bit teary as I took photos of professional hair coif #2.

His new look is very short, but somehow actually works to hide his bony defect more, and also it is no longer apparent how patchy the growth is. He looks great.

Here are the pics from last year: 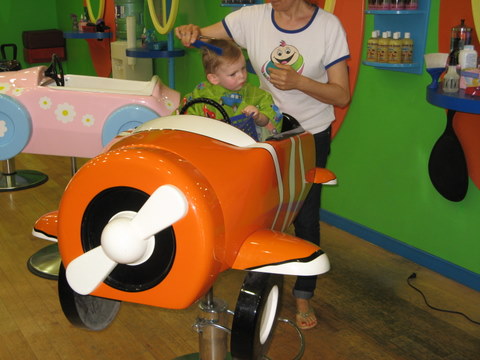 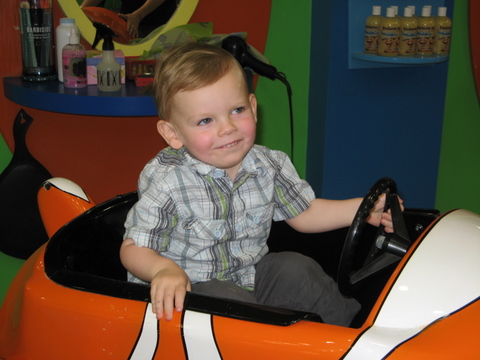 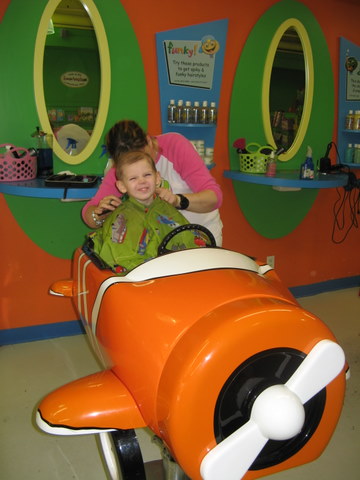 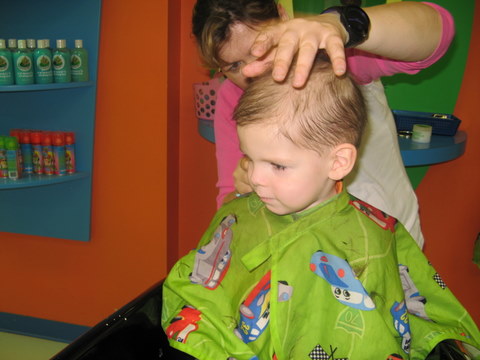 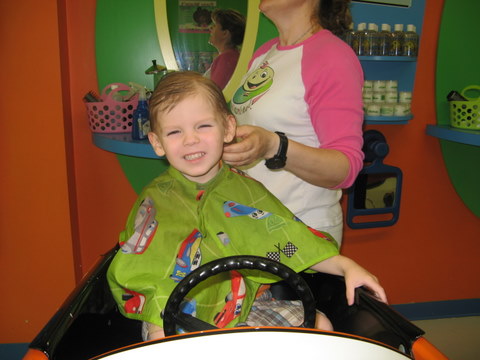