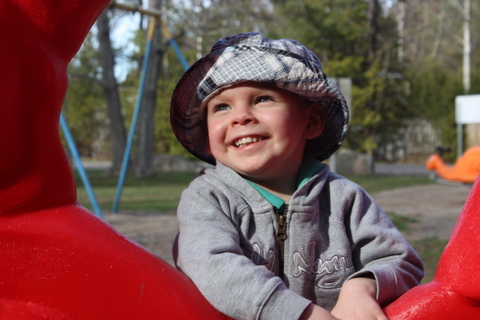 Notice anything different? After over 10 months of tube-feeds, losses, insertions, swallow studies and endless rolls of medical tape, we have come to the end of an era.

Two days ago, the Bean’s Daddy and I came to the mutual conclusion that Gavin’s NG tubey had long outstayed its welcome. We had a brief kitchen confab with Gav, yanked the tube and dumped it in the garbage. My Bean’s beautiful face shines out at the world again, unmarred by hypafix.

Over the last two months, Gavin has made huge leaps and bounds with his eating. Many meals are still a struggle and can take eons to complete, but we continue to work hard to get those calories in even if he’s not that interested in eating what’s in front of him. We can’t afford to take any chances. Our combined hard work on this front has paid off as Gavin has once again surged beyond the 14 kg mark, a weight he only saw briefly before when puffed up on steroids.

Once we’d established good eating patterns, we tapered off his formula feeds very quickly. He has had enough maltodextrin for one lifetime! Two issues remained: fluids and medications.

As I’ve mentioned before, Gavin must still have thickened liquids and is working on being able to swallow thin liquids again. It is very difficult to drink more than a litre of thickened liquids a day, and the average toddler drinks (based on an informal poll of friends) nowhere near a litre. Many toddlers will go through a whole day drinking very little, less than 200 ml, perhaps. Unfortunately, because of the damage done to Gavin’s kidneys, he must have a litre or more. So a month ago, we switched focus to fluid intake.

Gavin is usually awake about 12 hours or so out of the day. This means he has to drink about 100 ml an hour. What this translates to is one of us holding a cup in his face and getting him to take sips from it, every few minutes, all day long. He began to try to pacify us by taking really minute, teeny-tiny sips, until Craig introduced the “three sips” rule. (He has to take three sips each time he drinks.) You might imagine all of this gets a bit tedious for everyone involved. After totting up the amount he’d had in a particular day, we then had to top him up with water through the tube at night-time or later in the day. You can guess what happens when you give a small child 300 or 400 ml of water just before bedtime. There have been a few restless nights.

But again we are seeing results. Gavin is now drinking his litre a day and is consuming more much faster than he was able to before. We still believe that his swallow issues will abate, given time. Certainly, we hope to see a bigger improvement now that he no longer has a tube as an impediment.

The only other issue then, was whether or not he would take his meds. I may despise the NG tube but I have to admit that it is extremely useful when it comes to popping medications into small children. No yucky taste or difficult texture and in it goes. Bean still requires 4 (soon to be 3) medications. There are days when he must take all 4 and others when he only has to take 2 or 3. One is a tablet which we grind up into yoghurt and he happily swallows, two are liquids, and one is a gel capsule. To our astonishment and utter relief, he puts them all back, no complaining, no gagging and no running away.

In this life, I have learned to never say never. So I will not say that I will never permit Gav to have an NG again. But from where I sit it looks pretty bloody unlikely.