He built a small house, called a cocoon, around himself. He stayed inside for more than two weeks. Then he nibbled a hole in the cocoon, pushed his way out and… he was a beautiful butterfly! 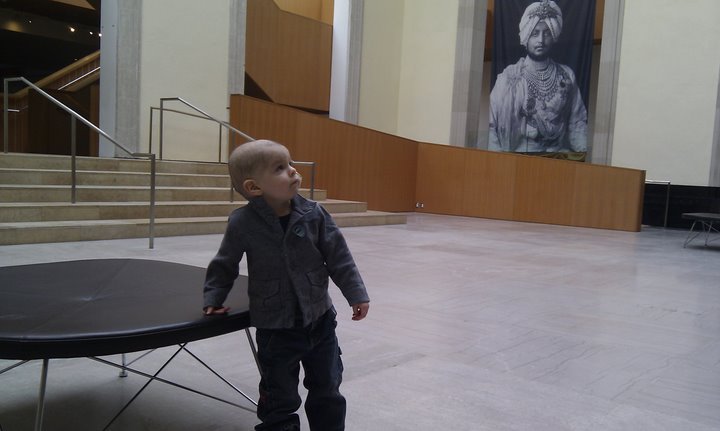 We are slowly making our way out of the cocoon. As the weeks turn to months we are beginning to feel a teeny, tiny bit more comfortable with exposing Gavin to the wide world again. It is hard, we must still exercise every caution, but we no longer feel the need to sanitize everything in sight and keep Gavin in a bubble. If I happen to hear a kid with a seal-like barking cough in public, I still run for the hills spritzing hand sanitizer on Bean as I go, but I think we are getting a bit better. It could be that Gavin himself has had a runny nose for the last five weeks straight. Some sort of virus is giving his immune system a bit of a test but he still seems happy and energetic.

I am beginning to piece back together a bit of a normal life again, and we are slowly touching base with friends and family. Of course, Gavin barely remembers anyone and is very shy when he is first put into a new social situation. I feel for him, as he hasn’t spent any time with children at all, and there is a huge difference between playing with kids and adults. Adults do what a bean wants, and don’t try to change the rules mid-play. Kids, on the other hand, try to take toys, barge into games and impose their own story-lines, play with toys in ways that aren’t “right.” It’s a hard adjustment for Gav, and I can’t help but smile and cringe at the same time as he tries to understand just what is going on when another kid takes a toy he’s playing with and runs for it. Thankfully, he’s learning to defend himself. He’s learning that when someone takes something from you, you go and get it back. He’s learning how to negotiate and navigate the point-blank blunt truthfulness of kids.  (What’s that thing on Gavin’s face?) I’m hoping with a little bit of time he’ll learn to enjoy himself with other kids, be silly and relax.

We had a busy weekend. Saturday morning we took Gavin to the AGO to check out some “ark,” as he kept calling it. We used to have a membership there and took him to a great children’s room on weekends before he became ill. It’s a lovely place for little ones to roam, if not the most child-friendly place in the world. Did the security guards/info desk people have to glare quite so harshly as we played in the revolving door? Really? Is life that serious? Gavin was completely oblivious to the negative attention and kept saying, Where’s the ark? I want to see some ark. We kept trying to explain that the paintings on the walls were in fact “ark” but he sneered at the Group of Seven as a bunch of rank amateurs. I guess art is subjective, as they say. We finally got him to pay attention to a couple of giant contemporary pieces, but by that point he was ready for lunch, so we went off to the cafe for some home-made mac and cheese. 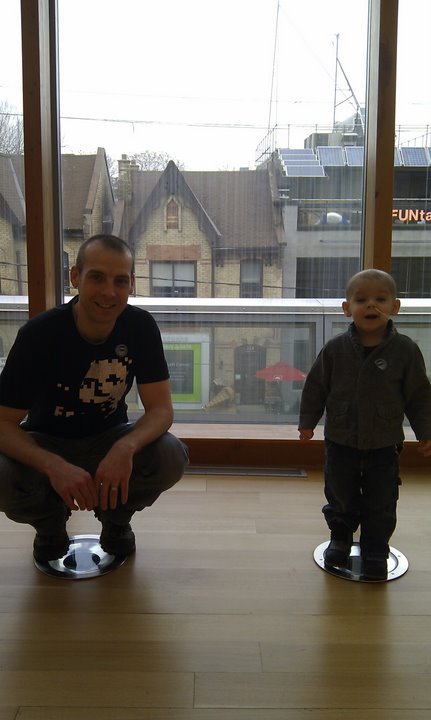 On Saturday night Craig and I left the Bean with Bubby and Da while we went to join grown-up friends for the evening. When Gavin found out we were going out, he got very upset and kept saying, But I want to go with you. He was consoled by the presence of Bubby though and waved goodbye cheerfully when we left. Unfortunately, because of the rock we are currently living under, neither of us had a clue that it was “Spring Forward” on Saturday night and so kept our dear Bubby and Da up until an ungodly hour. (Sorry)

As is typical in our lives, nothing goes on for ages and then we have two events in the same afternoon. Both of my dear grandmothers have recently celebrated their 96 birthdays, and the party for Great-Grandma Margaret was on Sunday. It just so happened that it was also the 3rd birthday celebration for one of our neighbourhood friends, the adorable Zahara. Although it meant juggling time a bit, I decided we had to try to get to both, and throw Gav in at the deep end, so to speak. 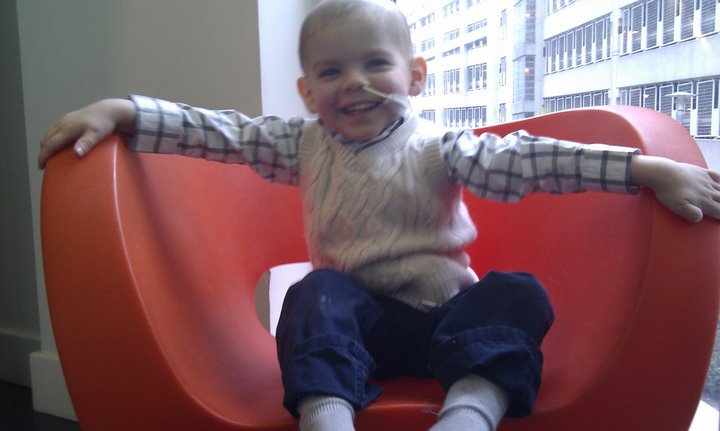 He was very shy when we went into the party room at my Aunt Karen’s condo, and didn’t say a word for quite awhile, but was quietly thrilled with the enormous Thomas the train set-up that our cousin Jack had kindly donated for the occasion. Bean parked himself on the floor, played trains, and ate cantaloupe (aka rock melon) happily, and then did not want to go on to the next thing until we had sung Happy Birthday. Zahara’s pirate-themed party was in full-swing as we arrived, with a drummer banging on a djembe and a bunch of little ones dancing around. Gavin found a basketball hoop and kept busy throwing a ball through the hoop for a bit, and then joined in a treasure hunt. Each child got a treasure chest to paint and decorate, a task that Bean took very seriously and spent a long, meticulous time focussed on that. Then he ate pizza and cake. Pizza and cake!! Many thanks to all the party-goers at both celebrations for making Gavin feel welcomed and loved. 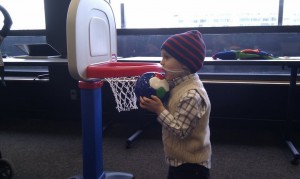 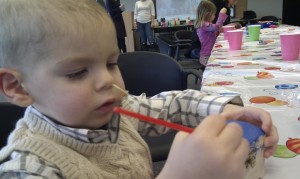 So we’ve been busy.

We made another great discovery last week. Back in the fall, when we were briefly home between Gavin’s rounds of high-dose, we bought loads and loads of bulbs and planted them in the front yard together. (Friends of ours had done the same thing when their son Gabriel was battling through treatment, and I felt it was a beautifully symbolic act.) Gavin has never stopped talking about the bulbs, and that the plants are going to come up out of the ground soon. He’s been watching for them ever since.

The bulbs are poking their heads up. Spring’s coming. Life returns.