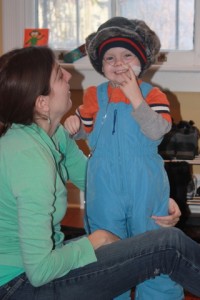 Despite the challenges he has faced, in many ways our Gavin remains a typical two-year old boy. He comes out with things that have us rolling on the floor laughing, he charms everyone he meets with a sweetness and engaging light, and he frustrates his mama to the breaking point with stubborn-stop-everything tantrums.

Last weekend we took a family trip to Bubby and Da’s cottage, an experiment in going away with Tankie and hypertension meds. All went well, and Bean enjoyed tobogganing and playing hide-and-seek in unexplored territory. While we were out playing in the snow, (a frosty but brilliant -10 day) he was initiated into a time-honoured Canadian rite of passage: the snowy face-plant. I admit I freaked out a bit more than a normal mum would if her child got a bit of snow on his face, but the kid is wearing oxygen prongs! 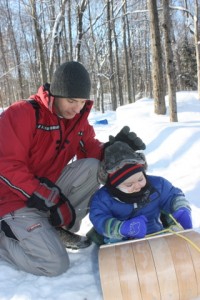 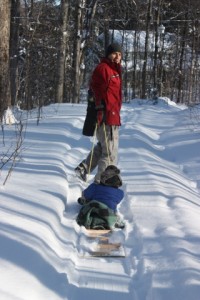 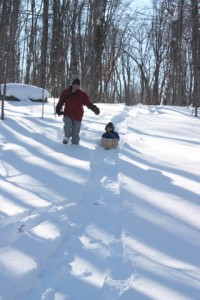 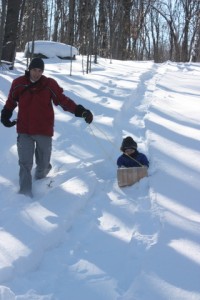 Gavin’s new game is pretending to be a baby. (I’m a baby, wah wah wah) Some of us are still in the habit of referring to him as a baby and this is no longer acceptable to “Big Boy” Gavin. This baby game though involves someone picking him up and cuddling him and pretending to feed him milk. As we played this on Sunday, he suddenly shouted out, Wait a minute! (Newsflash coming) I’m not a baby! I’m a big boy!

Our two and a half hour drive home was marred by the fact that Gavin refused to go to sleep. He spent the whole first hour asking questions, What’s that? What is that building? What are those lights? Every time Craig and I would try to have a conversation he would get annoyed and shout us down, NO TALK! Our thing on long drives is to ask the car how long it’s going to take to get somewhere, and Gavin was not happy with the answers he was getting. Finally we heard from the backseat, I’m frust-er-ated. I’m frust-er-ated. And Why does life have to be so hard? (Where did he get that one from?!) I finally had to sit in the back with him and sing songs the rest of the way just to keep him settled.

It can be very trying dealing with a child who has had such a different experience for the last seven months of his life. There has been no such thing as “discipline,” and we have mostly given him what he wants in order not to upset him too much. Unfortunately, now that we are home there are schedules that need to be maintained and sometimes we can’t give in to his every arbitrary whim. I know that toddlers are prone to meltdowns, but I’m not sure with Gavin how much of his behaviour is due to regular toddler-ness, or a side-effect from the steroids and other medications he’s received.

He and I have had many talks over the last week or so about listening to what mama has to say about something and the reason why I’m asking him to do something. But several times a day there comes a moment when he’s decided that he needs to do something right now, his way, with no deviations from how he sees things evolving. For example, one day he and I made a lentil salad for Craig in the afternoon. Now every day, at lunchtime, he insists on Make something for Dada’s din-dins. Saying “no” to this request results in a full-on, twenty-minute crying jag, as he simply can’t understand why I would want to make lunch for us at lunchtime, and not chef up Craig’s dinner a full seven hours in advance.

Naptime is a huge struggle every day, and takes an hour and a half lead-time to get him up the stairs and in bed. We then read books for half an hour, then I have to pretend to be asleep while he rages next to me and finally falls asleep. Once in dreamland, he sleeps for two or three hours, so clearly he still needs it, but goes SO unwillingly.

Yesterday morning we went to Da and Bubby’s house, where Gavin had a brilliant time scampering all over the place and playing with everyone. He threw a minor fit when it was time to go but agreed to get dressed, so I thought the battle was won. Unfortunately, when we got to the car, he decided that he wanted to ride home in the trunk and refused to go into his car-seat. When he finally got in his seat, he refused to let me do up his seat-belt. He just wanted to ride home with his seat-belt undone, and each time I attempted to do it up he writhed and screamed like I was burning him with hot pokers. (Yes, I did just try to force the situation but he wouldn’t hold still enough for me to do up the clips.) We ended up sitting in front of my parents’ house for more than 15 minutes, me in the back seat with him. He finally calmed down and said I sorry, mama between sobs, and we did up the seat-belt and drove home. He fell asleep on the way. I tried to carry him inside still asleep but couldn’t manage it with the O2 tank, so he woke up in the bedroom and threw another fit, because he wanted to have his nap in the guest bedroom! (He has never napped there before.) Tempers were lost on both sides and shouting ensued. I shouted at him to stop shouting, and he responded with I won’t stop shouting, I won’t stop shouting, I won’t stop shouting ad nauseam. We finally gave each other a big hug and agreed to go for a walk in the stroller. I bundled him up in his winter things again and strolled around the block watching those eyes close… only to spring open at the slightest noise.

I finally had to admit defeat (ungracefully) and took him back to the house to buy tickets for a Max and Ruby show that is coming to town in April. Just for fun, you should try to buy tickets for something online with a small child helping you and pressing random buttons. It only takes half an hour!

I am not a saint, I cannot be patient with him all the time, and in perfect truth, the whole family is realizing what a toll our last 6 weeks in hospital took on all of us. One cannot survive such stressful circumstances without going through a kind of post-traumatic stress disorder. I thought that I had dealt with things rather well while we were going through it, but am realizing now that there are a lot of unresolved emotions to sort through, fear, stress, grief, and survivor’s guilt. They are all heavy and hard to bear. And getting into a fight with a two-year old every day doesn’t help!

I do remember though, how lucky I am. I am thankful for that every day. I am grateful for my lovely, bright, funny and bratty boy. 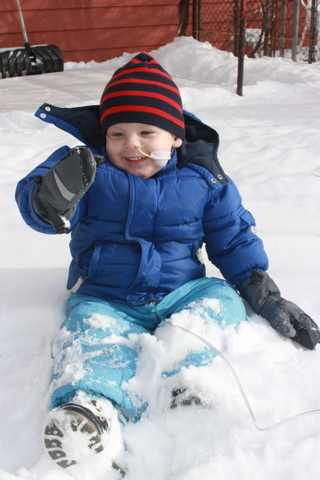 9 responses to “A Toddler”