Our Thursday discharge was the least stressful one ever, we actually did not need to make a trip to pharmacy for the first time (or so I thought) and didn’t need to return to clinic for blood-work in our three day vacation. As soon as we got home Gavin got in play mode and said hello to the toys. The house was sparkling due to our cleaner’s hard work, and we managed to mess it up in about 10 minutes with a stuff explosion everywhere.

Bubby came home with us and we bundled Beanie up and took him for a little walk in the extremely crisp early-winter air. I feel like I’ve missed the last five months and still expect to be able to wear summer clothes. Despite the chilly weather, I think it’s important to get him out and about when we can. Gavin fell asleep on our walk and I was looking forward to an hour or so of quiet, but set up his formula feed when we got home to run while he slept in his stroller. Unfortunately, I must have made the setting too fast, because he woke up a short time later, felt awful and vomited everywhere. I feel so helpless when he’s sick. It has become somewhat normal for us, but doesn’t change how awful everyone feels about it, including Gav. I quickly pulled off his clothes and bundled him in a blanket to watch a DVD while I cleaned up. After warning him to stay on the couch, I ran into the kitchen to get something and immediately heard a loud thunk from the living room. Of course, in the nanosecond that I was gone, he slid right off the couch, luckily still wrapped in the blanket. He didn’t hurt himself (much) and did not hit his head. It is very exhausting not being able to take your eyes off your child for one second. I find it hard to foresee a time ever when I won’t have to worry about him falling over or banging into things.

Our only objective on Friday was to get a muffin and a coffee from Mitzi’s. It is the getting of the muffin that is important to Gavin, not the eating. He ate one tiny little nibble of it, but didn’t want any more. We all went to the park for awhile and played in the sandbox and on the slides. I’m so thankful that the weather is still good enough to be outside a little bit. During afternoon nap Craig and I had to put in an hour or so outside doing yard work, but I think that’s it for the season.

I’ve spent most of the weekend trying to get Gavin to eat various things. At least now when he wakes up he says hungry and wants to try something. He had a couple of bites of French toast yesterday, some soup and pasta on Friday and plain yoghurt for snacks. This morning I managed to get him to eat a portion of baby cereal, which is a good texture for him and full of iron. It took me almost an hour to get him to eat two tablespoons of it while we played. Once we are home we’ll be able to work on eating without any other distractions.

As I’ve said before, Gavin loves the concept of cooking and eating, but not the reality right now. Our good friends Tracy, Hugh and Jack came over for a visit yesterday and Tracy brought a cookie-baking kit for Gavin that she’d put together. The moment they left he was all over it, and we made gingerbread cookies in a five-person operation, with Auntie and Bubby there to help too. He loved cutting them, baking them, icing them and putting on sprinkles, but when it came time to try them, flatly refused. (I don’t like) It was fun for him anyway.

Craig and I escaped to see a movie together yesterday afternoon, (leaving Bean with Bubby and Da) and of course had to go to the hospital to pick up the formula which we’d forgotten we needed. Craig insisted that it had been a year since we last saw a movie together, but it was actually only about 7 months. Again, I have to remember that there will one day again be a time of normalcy.

This morning, although it was exasperating getting there and back, we took Gavin to the zoo again. He complained a lot about getting ready and going there, which was making me question the value of the whole excursion, but once there had a good time watching the turtles and ducks in the Indo-Malaya pavilion. Not so thrilled with the orangutans, for some reason, more excited about the big fish and waterfall feature. His staying power is not long though, after about half an hour he asked to go home, and said he was feeling sad. I’m not sure if sad means tired, sick or just sad.

We went back to hospital this evening and Gavin didn’t object at all. He just didn’t want to go upstairs to his room, so we played hide and seek in the Atrium for about twenty minutes. Gavin has loved hide and seek since he was about 10 months old. He thinks it’s hilarious, but still kind of misses the point because he’ll tell us where to hide, or shouts out from where he is hiding. Mama, in the kitchen! He loves the looking for people, not the finding so much, because the game is over sooner and therefore is boring. He also loves counting, One, three, three, five, here I come! (We are still working on counting) We also threw coins in the fountain and made wishes. My wishes were teary behind his back.

Of course, they put us back in the same room we vacated three days ago. So it was completely unnecessary to pack everything up and bring it home. Thanks, I enjoyed moving those bags with my tendonitis. I pretended for Gavin’s sake that it was a new room, Wow, this room is cool! We then realized that we’d left Minnow at home, an error which (somehow) Gavin took in stride. We are running out of excuses about Monkey. I’ve yet to hear good news from the Linen Lady and the new Monkey hasn’t arrived yet. We have told Gavin that Monkey went to have a bath and we need to ask various people if they’ve seen him. (Auntie, do you know where Monkey is?) This is working for the time being, but every time something reminds Gavin of the antics Monkey gets up to, he gets a bit down and heaves a big sigh before moving on. I understand now why parents return to parks and picnic spots at two in the morning, searching for bears and dolls. Oh Monkey, come back to us!

Praying with every fibre of my being tonight. This is the beginning of the end. We must remain hopeful, remain positive, it’s our only way to get through this with our sanity intact. This is why I’ve seen hospital mums and dads with these tattoos on their bodies. Believe. Hope. Faith. Sometimes you need a constant reminder. 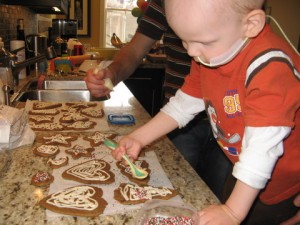 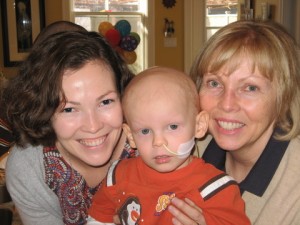