The Bean and I have just returned from a 12-day jaunt to Florida.  It’s become a bit of an annual tradition for us as this is our third year running.  My parents rent a place there every winter and we’ve been taking advantage of their generosity in giving us free accommodation!

The first year Gavin was a very little bean – I was about two weeks pregnant and couldn’t keep the news to myself.  (I even told the people sitting next to me on the plane!)

In 2009 he was a six-month old chubby bub.  He had his first swim in a pool and got to ride shotgun in a Chariot around the bike-paths of Sanibel.

It’s hard to believe it’s been a year since then and our winter migration has already come and gone.  Destination 2010 was Naples, the town where sixty-year olds go to party.  Naples is lovely, with coconut palms and massive fig trees that remind me of Sydney.  We stayed in a residential area a 10-minute walk to the beach, and the house had a pool – hurrah! 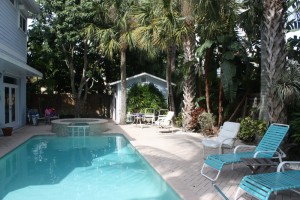 But it was never quite warm enough for swimming – boo.

Gavin and I headed down solo for the first week and spent some quality time with Grandma and Grandad.  We hit the beach and the Bean discovered the joys of sand and surf.

The week was only slightly screwed up by the fact that my darling son decided to go on a sleep strike for 4 days straight.  So reminiscent of the gritty-eyed days of newborn parenting.  Up at all hours of the night, trying to get him to remain quiet while we ate our oatmeal at 5:30 am.  I am definitely not a morning person as those who know me can attest – I desperately missed Craig’s chipper morning self and didn’t cope well with sleeplessness.  Actually found myself heading to Starbuck’s at sunrise one day – a first for me.

Rescue arrived Valentine’s Day when Craig flew in from Toronto to spend a few days with us.  Beanie immediately got back on track and starting getting up at 7:00 again and eating all the meals that Daddy lovingly prepared for him.  Go figure. 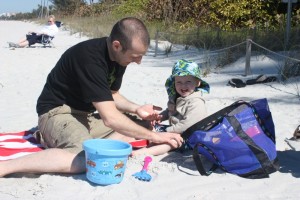 The weather may have been uncooperative but at least the sun was shining.

One response to “Here Comes the Sun”