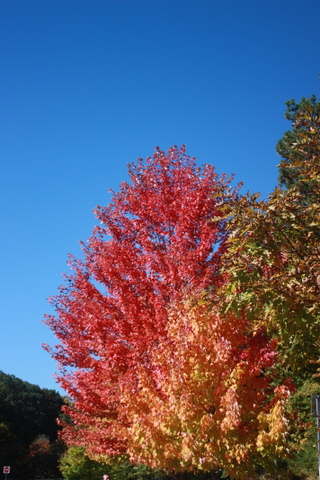 Most of Canada have spent the majority of the day stuffing themselves silly with turkey and pumpkin pie.  We spent the day packing to return to hospital, but despite the depressing circumstances we were determined to enjoy our short Thanksgiving weekend as much as we could, and honestly be thankful for all that we have.

Three months ago, the future was very unsure, so I consider myself blessed to have been able to spend the weekend with my husband and Beanie out in the beautiful fall sunshiny weather.  We pulled the bikes and the Chariot out of 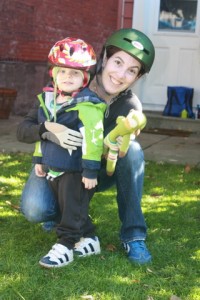 storage in the basement and helmeted up.  Gavin was dancing with excitement and once strapped in, was shouting Yaaaay! behind me in the trailer.  We headed over to one of our favourite playgrounds, the castle one in High Park, and then checked out the animals in the little zoo there. 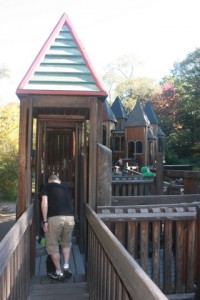 Later in the day, Bubby, Da, Auntie Loz and Uncle Adam arrived with Thanksgiving dinner pre-made, (Thanks Mom and Lozza) leaving me only to whip up some mac and cheese for Gavin if he would eat it.   On a side note, he has been rather experimental with eating lately and snacked on Vegemite on toast yesterday too! I do not have words to express how content I felt to see Gavin sitting at the dinner table with us, wearing a freshly-ironed button-down and tucking into his “pata.” (pasta) He had not sat in his high chair in over three months, but actually stayed in it for most of the dinner, until he insisted that Bubby go off with him to play with his new lego set.  We could hear them playing some game that involved bunnies eating flowers on a farm.  Once he hits upon a good storyline, he really likes to stick with it. He only returned to the table to try some dessert, and we were all shocked when he ate quite a few bites of pumpkin pie!

This morning we got on the bikes again and cruised along the waterfront to another playground we like.  After an hour or so we had real difficulty tearing Gav away, as he went down the slide over and over and scaled the mini climbing wall, with a little help.  We blew bubbles with our new bubble kit from Naomi, making huge ones that all the kids in the playground were chasing and popping. I really felt today that without his NG tube Gavin might almost have been a “normal” kid.  Speaking of that, it was pretty funny when a pair of little twins, just over a year, both separately reached for Gavin’s NG and tried to pull it out! Their mum told me that they were preemies and so both had tubes when little – perhaps they were reacting to bad memories.

Yes, it was hard to leave home and check in today.  But I suppose we must actually be thankful that there is a treatment option available for Gavin that might work, as hard as it may be to do it.  The next few months will be beyond imagining, so I’ve cemented a few blissful moments of this weekend in my mind to light up the dark days to come.  Sandboxes, slides, banana ice-cream, pumpkin pie, bikes, helmets and bubbles! And sun, yellow leaves and smiles.