As soon as you become a parent, you quickly realize that your brain will never be quite the same again.  This is because a large portion of it suddenly has as its only function Worry About Child’s Well-Being.  So if you don’t have kids but have noticed that your friends seem a bit stupider since they had theirs, don’t be too critical, it’s just evolution at work.

Anyway, the part of my brain that used to hold a fair bit of useless trivia and song lyrics has now been re-labelled “Gavin,” and runs programs in the background even while I’m carrying on a fairly normal conversation with someone else.  The point of all this is that today at the kindergym I was chatting with some other moms but of course watching Bean out of the corner of my eye when he became involved in a fairly big-impact car crash.  He was hanging out in one of those big, plastic Little Tykes cars as he loves to do, when one of the bigger kids, pushing another car with passenger, slammed headfirst into him running full-tilt.  The impact forced him out of the seat and under the wheels and he became trapped under the car.  There was a collective gasp and screams of horror from the onlooking moms and nannies.

Of course, I was over in a flash with the Jaws of Life and fished him out saying, “You’re okay, you’re okay” and feeling his legs for broken bones as he wailed in shock.  There were many heart-felt apologies, and I tried to accept them with good grace, but I think it’s only natural to feel that knee-jerk can’t-you-control-your-child reaction.  Once the tears dried up he seemed to be fine, although a bit shaken and clingy.  Ultimately, he wasn’t hurt, but the fear and adrenaline that shot through me when I heard him scream took awhile to dissipate.  I turned to a friend and said, “Oh God, imagine what it’s like when they come home with broken bones?”

That’s the thing, when they’re little babies we worry about them rolling off the bed, choking on something or sticking their fingers in sockets.  As they get older we fret about them falling off jungle gyms, concussing themselves skating and knocking their teeth out in bike accidents.  I want to think that I’ll be cool, calm and capable when Gavin drags himself home bleeding from a nasty brush with the pavement, and matter-of-factly administer band-aids and ointments. It’s more likely that I’ll go into shrieking hysterics and rush him to emerg.

The fact remains though, that one day he’ll want to go bungee-jumping, dance all night on a beach in Thailand or perhaps play professional hockey.  And naturally that Gavin part of my brain will be worrying away.  That part of the brain is why your mom still tells you to put on a hat or makes you food when you’re hungry.  Even though you’re 34 and have lived out of home since you were 18. 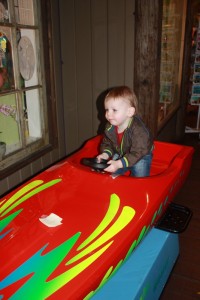