I’m doing busywork today. Organizing old papers. Vacuuming. Fixing a picture-frame. Anything, really, that might distract me from the thought of Skye’s MRI on Thursday, July 21st.  This will be her very first one, and I’m dreading it.

Contemplating Thursday morning has my abdomen tied up in knots. Do I have reason to believe that the scan will be anything but clear? No. And yes. Well, realistically, no. But the fear that accompanies each scan for my children is all-encompassing, and subsumes logic and rational thought.

Skye has only had, so far, the one cranial ultrasound, which didn’t reveal anything frightening, but took place more than a year ago. She is now almost 21 months. The age at which Gavin was diagnosed. On the recommendation of Gavin’s neuro-oncology team, we’ve now decided to begin surveillance MRIs, in the hopes of catching the beast early, or better yet, not at all.

Over the past couple of months, a few things have happened which are worrisome but not exactly telling. One day during lunch, Skye blanked out for several long seconds. It looked to me like an absence seizure. I already had an appointment lined up with a paediatric neurologist, just to keep an extra set of eyes on her, and coincidentally they were able to give me an appointment for the next day. My meeting with him was somewhat reassuring, although Skye wailed the whole time, making it difficult to chat. He was fairly certain that a brain tumour wouldn’t cause that type of seizure, but to check whether it was indeed seizure activity, he referred us to Sick Kids for an EEG.

I’m now in a place where a seizure disorder doesn’t worry me all that much. If that is Skye’s fate, it’s a condition we can live with. Brain tumours are not livable. My worry is always, always that. Every unusual head tilt or slight shift of balance, or unwell feeling stirs up powerful, sad memories.

The other issue which has cropped up and become more obvious over the past few weeks is Skye’s tendency to in-toe when she walks. (AKA walking pigeon-toed.) This little habit has become worse and worse, so that she very often trips over her own feet and falls. The number of falls she has daily is alarming. It wouldn’t be alarming to any other parent. He/she would probably just think, “Oh, my poor, clumsy, child.”

I can’t help but think back to the number of falls that Gavin took as a toddler. I had begun to wonder if there was something more at play several months before his diagnosis. However, I don’t know, and I will never know, if his tumour was actually there at that time, or if he just suffers from poor balance – as I do – and those tumbles were completely unrelated.

Of course, as time went on with him, he became ill. Lethargic, unhappy and unable to walk, every step resulting in a fall as his vestibular system was completely compromised.

Skye is not lethargic. Nor is she unhappy. She was ill last weekend, with a fever for 48 hours, and a slightly poky appetite. I would say that she’s still not over that entirely, but her spirits are, as always, wonderful. She’s my sweet, fun-loving happy girl, who gets up in the morning and demands to be dressed in a bathing-suit, just in case we make it to the pool.

Last week I took her to the physiotherapist, to try to begin to correct this in-toeing problem. The physio felt that the issue is due to her ongoing hip problems. She displays the classic symptoms: preferring to sit in a “W”, walking with feet turned in, and tripping and falling frequently. So that also is reassuring, an explanation for all these falls that is not the brain tumour explanation. My head knows that.

Unfortunately, I’m leading with the heart this week. And my heart says I can’t stand this. I can’t bear the thought of her diagnosis. My heart says, What will we do? How will we go on? Can we survive this again?

So I’m projecting to Friday, which is, of course, Craig’s birthday. I’m hoping for fast results. I’m hoping, praying, believing in clear. That’s all I can do. 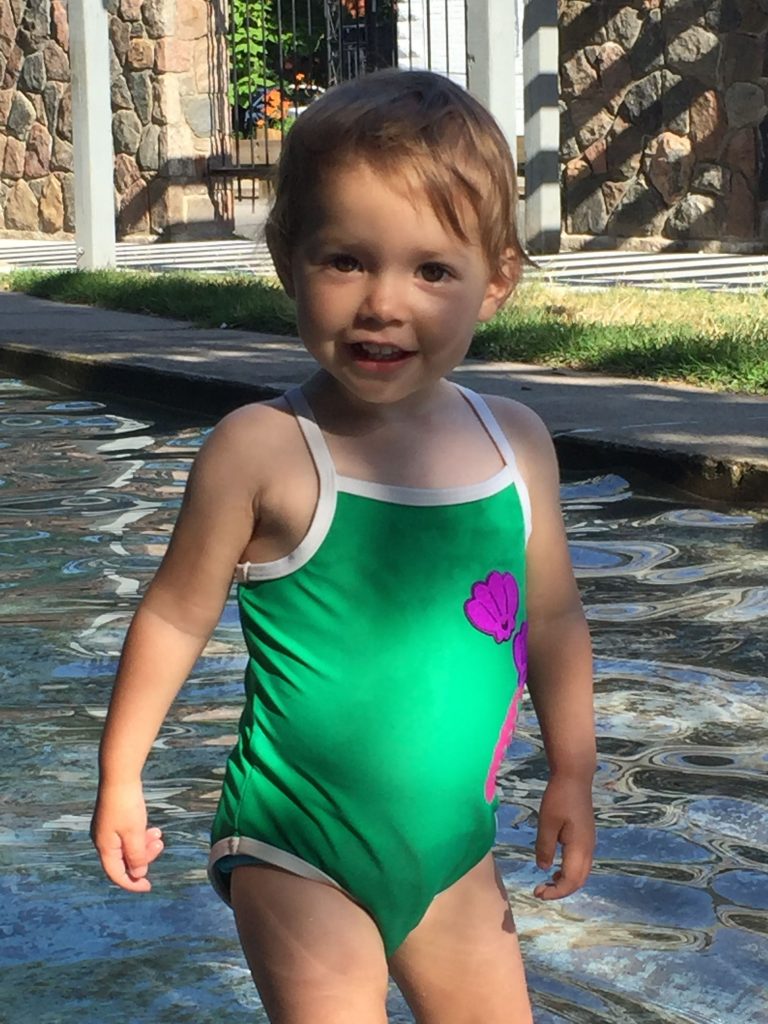 4 responses to “The Looming Feeling”