Browse: Home / The Days are Long, but the Years are Short

Are there more grown-ups or kids in the world? – Bean

My son asked me that a few days ago, and I spent a couple of minutes explaining that there are more grown-ups in the world, simply because we all spend far more of our lives being adults than we do being children. Plus, we’re all living longer than we used to, say, 100 years ago. I guess that made sense to him, because he left it there, and moved on to other things.

It brought home to me though, how very fleeting childhood is. In our society, we are considered “children” until the age of 18. The true end of kidhood though, seems to hover somewhere around the age of 12, with most teens hurtling out of adolescence as quickly as they can, ready to brush off the pixie dust and pick up the reins of their adult lives.

Now that Gavin is 7, I’m becoming more and more aware that the days in which he will continue to be a child are not many. It’s also been, somewhat sadly, brought home to me that I, myself, am contributing to the end of his little-kid days with my curmudgeonly behaviour.

Back in early December, we went to a family Christmas brunch that we attend every year. There is a Santa photo-op, and each child receives a gift from The Man in Red. Bean has always viewed Santa Claus with an awe close to reverence. At some Santa visits in the past, he’s been so nervous he could barely speak, like a fan-girl getting to meet her favourite celebrity. On this occasion, I urged him forward, and encouraged him to tell Santa what he wanted for Christmas. To my surprise, with a tight-lipped grin, he didn’t say anything. Again, I asked him if he wanted to tell Santa, but he just shook his head. I thought he was feeling shy, so I dropped it, and we snapped a few pictures with the jolly old elf before moving on to our bacon and eggs. 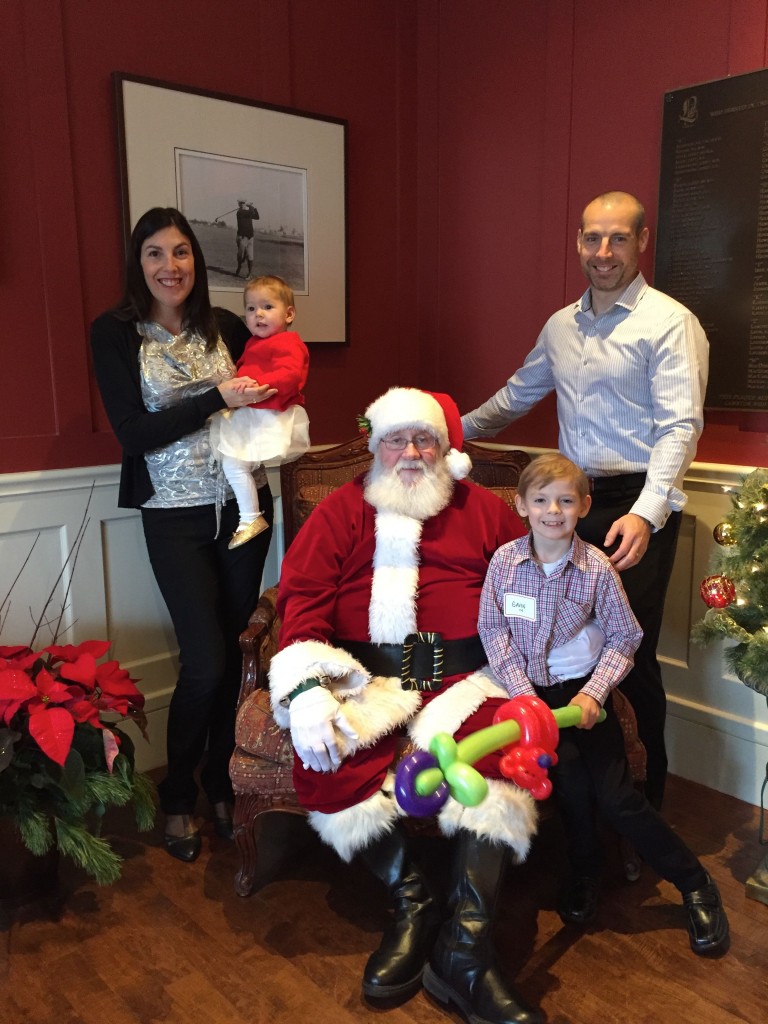 The following week, on our walk to school, he was talking about Christmas and what he wanted as gifts. I was only half paying attention, lazily complacent, as he’d already told me what he’d set his heart on, a beautiful art kit in a carrying case, which I intended to get him as his Santa gift. Then he said something that caught my attention,

But there’s one other thing I want Santa to bring me, but I didn’t ask him for it when I saw him.

I’m not telling YOU he responded. Santa knows what I want and you’ll find out on Christmas morning when he brings it to me!

Wow. A shot of amusement-tinged panic went through me.

I reiterated that he had to tell Santa what it was that he wanted though, and he hadn’t told him at the family brunch. Pushing further, I wondered out loud why he hadn’t wanted to tell him. He skirted the issue for a few minutes, before it all finally came tumbling out. He hadn’t told Santa what he wanted because I was there, and he felt sure that his mum would be the epic killjoy that quashed his Christmas dreams, by telling Santa not to bring him what he wanted. Because he knew that I didn’t want him to receive the thing he hankered for.

What, you ask, was this longed-for item?

Why, LEGO, of course.

LEGO, the joy of children everywhere and the bane of a parent’s existence. LEGO underfoot in teensy bits. LEGO to be organized. LEGO getting dusty on every surface of your child’s room. Whole swathes of Pinterest dedicated to ways of keeping it orderly. Ever newer and grander sets required to keep upping the ante each year.

Let me just state for the record, that Bean has a fairly insane amount of LEGO, as many members of our family have been very generous to him. My efforts to keep it contained to one area of the house – his room – have been largely successful. I have spent hours sorting bricks and putting mini-figures into little plastic hardware boxes, each with a head and legs, if not their original head or legs. I have also, happily! spent hours putting together sets with him and playing the LEGO role-playing games dear to his heart.

And apparently, I have also complained, ad naseum, about how much LEGO he has, and avowed that NO MORE LEGO will be coming into this house, ever. Ever. I have threatened to “clean up” his LEGO while he’s at school if he doesn’t put it away himself. I have said things like, “Do you really need more LEGO, buddy?” when he’s expressed a yearning for a particular Minecraft set.

You can see why he didn’t want to tell Santa that he wanted LEGO in front of his dear old mummy.

I felt like an evil shrew trying to vacuum up my son’s pixie dust.

With a bit of fast talking, I convinced him to share with me the type of LEGO set he was after, and then made sure that he told Santa at our official Santa-session just before Christmas. On the day, he was overjoyed to receive a set from Santa, along with a couple of other sets from family members, including me.

I had come to the sudden, belated realization, that the years in which he’ll be asking for LEGO are short. At the age of 7, he’s still fully on board with both the parent-perpetuated myth of Santa and the magic of Christmas. I want him to go on believing in its magic for as long as he possibly can. Especially, as so many days of his childhood have been decidedly un-magical. Days of hospital, and drugs, and vomit, and pain, and procedures.

Some day, not too long from now, as a teen or young adult, he’ll decide what to do with the several tonnes of LEGO amassed in our house. For now, though, our home still resounds with Star Wars laser-blasts and the clink, clink, clink of bricks being sorted and assessed. Although all these little plastic bits set off my OCD, I’m okay with that.

I’m more than okay with that. I’m holding on to the magic. Holding on tight with both hands.