It has been awhile since I last posted anything, as we’ve been BUSY. 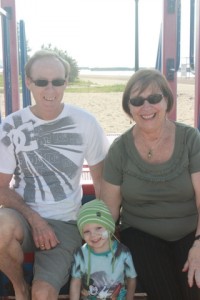 Nana and Pop arrived on the 26th from Australia with a truckload of Vegemite, Violet Crumble and other Aussie delights, plus incredible hand-knitted jumpers for the Bean.  They stayed with us for about 10 days and luckily were here to celebrate Gavin’s 2nd birthday with us.  Their stay was a bit low-key, as we felt it was important to keep Gavin at home until his counts became good enough to venture out places.  Once he was feeling a bit better, we managed to get out to the zoo, the park and other outings. 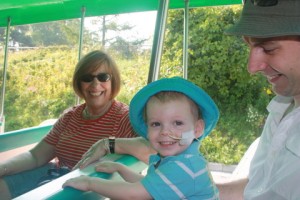 The birthday bash revolved around opening a mountain of presents, a kind of tradition in my family.  I tend to go a bit crazy buying gifts and Bubby does too, so Gavin actually got bored with opening prezzies and just wanted to play with his new toys.  There are still some left that I’m saving for bed-bound hospital days coming up this week.  The hands-down winner was Auntie Meaghan’s gift, a Fisher-Price “Recyling Truck” that almost started a toddler-fight between Gav and our friends’ son Jack.  Eventually, Gav grudgingly agreed to take turns putting the “recycling” into the truck, as it sagely intoned in a fetching ditty, “Not everything is rubbish, so think before you throw.” 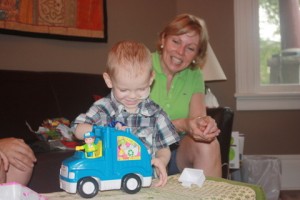 I can’t believe he’s 2.  It was a very emotional birthday, as I’m sure you can imagine.  I wanted everything to be lovely for him but relaxed, without too many people, as he does tend to become drained as the day progresses.  He got so many beautiful presents, special thanks to Nana and Pop, Bubby and Da, Uncle Duncle and Nikki, Tracy and Jack, Rachael, Alex and Charlotte for making it a special day for him.

3 responses to “The Present Mountain”