Browse: Home / In Sickness and in Health

At the beginning of 2015 I resolved to try to unhitch our lives from the constant round of medical appointments and hospital visits that has been our fate for the last five years.

We visit Sick Kids on an almost weekly basis, and have other various appointments to attend. Between the two kids, I try to keep only two per week on the schedule, and book them outside of school hours for Gavin. He’s missed a total of 20 days of school this year, and cannot afford to miss one more. But sometimes it can’t be helped.

Recently I took Skye for an appointment with her paediatrician. While sitting in the waiting room, I overheard another family say to the assistant as they left, “Okay, see you in six months!” SIX MONTHS. The words wildest and dreams sprang to mind.

The main issue continues to be Bean’s struggle with Cyclic Vomiting Syndrome. He has gone through a rough patch since Little Sister arrived on the scene. He was hospitalized for dehydration 4 days after she was born. The excitement and high emotional roller coaster was too much for him. I spent the night alone with our newborn, in recovery from surgery, while Daddy escorted Gav to ER. And then he was there two weeks later. And two weeks after that. And two weeks after that. To a total of FIVE overnight stays since she was born.

This obvious escalation of his condition has been worrying. It’s also become clear that no “natural” solution was going to be effective on its own. I had to admit that I had tried everything and that it was time to revisit the idea of a daily medication, as the meds we were using in-the-event-of just weren’t working. Craig and I were loathe to do so, as we’d seen some side effects the last time we tried. But we finally found the doctor at Sick Kids who is the resident expert on CVS, and so have taken his advice to try a medication which Gav started about a month ago.

So far we have not seen any major side effects, which is a relief. It has now been six weeks since Gavin was last in hospital. I wish I could say how wonderful that is, but unfortunately he has now been facing almost daily episodes of headache, nausea or vomiting. This isn’t the first time that he has gone through such an intense time, but it becomes hard to say what is better. Feeling pretty sick every day or feeling violently ill every two weeks?

I keep notes in a “health calendar” for an easy record of his episodes, with a mind to identify triggers such as events, environment or food. We now see that the excitement of “special” days sets him off – as he was sick on his birthday, the first day of school, Thanksgiving, Christmas Day, Valentine’s Day and my grandmother’s 100th birthday. We use some techniques to help him stay calm when his emotions rocket him up to the stratosphere. 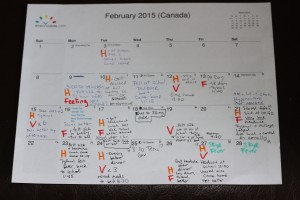 So as usual, Gav’s health is a work-in-progress. I help him live as normally as possible, while also being on-call when he needs to be brought home from school once or twice a week.

But of course, with a baby in the mix, it is all far from easy.

Little Miss Skye has had her own problems to deal with. She’s battled 3 viral infections since she was born, 2 of them requiring stressful ER visits and tests. The most recent bout was last weekend. I gritted my teeth while her fever raged and dosed her with baby Tylenol. With a clear head ultrasound and NO other symptoms apart from fever and misery, I couldn’t take her to hospital to be poked with a clear conscience.

So for 72 hours I held (and nursed!) an unhappy babe. And hoped she would just get well. Like a normal child. Like a child that only has to go to the doctor every six months for a check-up. And she did. Whatever it was, it faded away, and my smiley sweetheart was back to normal.

Which brings me to today. We were back at the HSC this morning for a hip ultrasound. Her 5th. On her last visit, I was told that the problem we were observing was “99% resolved.” I begged them to release us from being followed, I mean, was it really necessary? They asked me to bring her back “one more time” just to be sure the problem has gone away entirely.

I felt confident this morning that we were almost through with Baby Hip Clinic. So I broke down in tears when the doctor told me that the problem hasn’t resolved. I was misinformed at the previous visit. Skye requires an orthopaedic harness. And they wanted to put it on her today!

I had to take a moment to call Craig to fill him in. And swear a lot. And decide what to do. We are about to go for our first resort holiday as a family ever during March Break. I am equal parts excited and nervous about it. Part of me is resigned to the fact that it just might not happen at all – depending. At no time did I picture my baby in a harness that cannot be removed for the first five weeks of treatment.

In the end we decided to wait until after the trip to put it on. One less thing to think about.

For now – gotta go, you guessed it, another appointment to get to!

2 responses to “In Sickness and in Health”