Disclaimer: This post is deeply personal, and not for the medically squeamish. 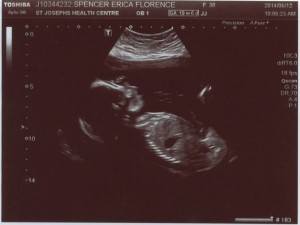 No, your eyes are not deceiving you. Yes, Gavin’s little sister has currently taken up residence. She’s been baking away for 20 weeks now and making me feel elated. And miserable. And excited. And fearful. She will make her grand entrance this autumn.

I’ve been waiting a long four years for this little girl. In the hard days after Bean’s diagnosis, the future of our family was very uncertain. We’d learned that Gav carried a genetic mutation which predisposed him to certain types of pediatric malignant tumours – in his case, CRINET. On learning this, I then knew, without a shadow of a doubt, that I was the carrier that had passed it on to him, although Cancer Genetics assured us that it was extremely unlikely, I knew, that when it comes to our family and its history, that it was in fact, extremely likely.

It wasn’t a shock when I got the phone call that told me that I had tested positive for the same change. And it wasn’t a shock when we discovered that my mother did too, and my grandmother before her. In some ways it helped, because it proved that not every carrier ends up battling a brain tumour. It was still challenging news to digest: to be told by scientists that you have a genetic cancer-bomb ticking away in every cell of your body is not easy. It is even more difficult to then get up and continue to live every day with the firm belief that cancer is not going to happen to you. Ever.

Of course, the other information that we were given was that we would be taking a risk in having more children. Our offspring would have a 50% chance of inheriting the mutation too, and then of course, the increased possibility of a pediatric brain tumour. HOW increased this possibility was, was unknown. We were given a few options. We could:

All of these options were considered. Many, many, long talks were had. Finally, together we decided that IVF would be the best, safest route for us. More than two years ago, we waded into the murky pool of fertility treatments. In our special case, the genetic testing would be done in the US, as it is not yet available in Canada. Of course, this meant that it would more than double the traditional costs of IVF treatments, but with the support of our family we wanted to try.

With boundless optimism we began the first round.

I remember feeling quite sure that it would work. I learned many things through that journey, not the least of which is that most of us really have no comprehension of how IVF works, what women suffer who go through it, and the immense toll that it takes on one physically, emotionally and spiritually. The reason for this knowledge gap is that most women who have undergone fertility treatments tend to keep quiet about it.

None of it makes for pleasant dinner-table conversation, does it? How can you possibly share the pain of the injections you must self-administer for weeks, the emotional highs and lows as your hormones go off on a mad tangent of their own, and the early morning trips for daily blood draws and internal ultrasounds. The egg retrieval and high hopes as embryos are formed, and then the crushing disappointment and loss when the round fails, and you must begin again.

Throughout the process, I learned that I am always an outlier. I developed a fairly rare complication called ovarian hyperstimulation syndrome. This means that my body did NOT enjoy hormone therapy. It can be potentially life-threatening if not treated properly. My ovaries produced a plethora of eggs. My abdomen was distended and I was miserable. But I was also quietly hopeful about my chances.

The egg retrieval procedure was a nightmare, and it shouldn’t have been. Again, outlier. In the end, though, I had 30 eggs to work with. Most women get less than 10. Over the next few days we were getting our embryo updates – we had 14 embryos to sample for testing. I felt very certain that soon we would be welcoming a baby.

And then I got the call. My doctor was so sorry to tell me that the testing had come back. In a completely shocking turn of events, all of my embryos were chromosomally abnormal. They did not all test positive for the mutation, but they each had some chromosomal change which meant they would never result in a healthy pregnancy. There was no point in even trying. The doctor was stunned and couldn’t hide it. He had no explanation for it, and had “never seen anything like it in such a young woman.” He said he wasn’t certain it was even possible for me to get pregnant naturally.

It took me a year to recover from that unbearable outcome. And then, spirit rallied, we decided to try one more time. We switched to a different clinic with a more helpful doctor. We tried a different protocol. Everything was managed much more professionally and I felt cared for. In the end, though, we got the same result, hyperstimulation, too many eggs, lots of embryos, all of them abnormal. It wasn’t a shock, but was heart-rending all the same.

My doctor was deeply sympathetic. She didn’t feel IVF would be successful for me, but if I wanted to try again, they could tweak the protocol. I could neither handle nor afford another round. I had only done 2 and felt physically drained and damaged. I cannot comprehend how women persevere through round after round, but I can assure you that it takes an olympic level of stamina and grit. My doctor also told me, in contrast to my previous doctor, that she felt quite certain that I could get pregnant naturally if I chose to take that route.

And so, The Great Leap.

Together, Craig and I acknowledged that another child was the missing piece from our family. Each of us has two siblings, and with the strength of those relationships in mind, we couldn’t imagine raising Gavin as an only child. We felt he deserved at least the chance of having a brother or sister, and so quietly decided to try. And despite my “advanced maternal age” of 38, a few short months later, I learned that I was pregnant. So much for the theory of Doctor #1.

Was this decision wise?

4 responses to “The Great Leap – Part I”