As ever, I’m astonished at how quickly time sprints away, and here we are at the first day of spring. Which in Toronto means that it’s grey, chilly, and the dirty old snow and ice left over from this ridiculous winter is slowly melting to reveal a disgusting debris of cigarette butts and plastic bags everywhere. But, the tulips are pushing hopeful heads up in the backyard so it ain’t all doom.

I ended my last post with more hopeful prophecies about Gav’s cyclic vomiting syndrome. I wish I could report that we have quietly been living in wellness, as sometimes it’s exhausting just to explain how frequently and consistently Gavin is sick.

My last post was February 13th. He came home that evening sick and stayed home from school the next day.  Ups and downs over the next two weeks, then home sick again on the 28th. Well again the next day, barfing again on Saturday night – which meant, unfortunately, that Craig and I had just received our dinner out at a restaurant when Bubby rang to call me home. I braced myself for the beginning of a CVS episode, but he was kind of okay on the Sunday. Home from school Monday, went on Tuesday, home on the 5th. And the episode really began.

I don’t know what all of that feeling unwell was in the week prior to the episode, but sadly, this beast just seems to want to get its claws in him, and won’t let go until it’s run its course, and wrung every last drop of everything from him.

On March the 6th I eyed the calendar anxiously – we had flights booked to Florida for our holiday on March 8th. Obviously, we could only go if the vomiting called a ceasefire. We had 2 days to get over it. He is usually better by the fourth day but not always. I tried to change our flights. No dice. And to make things exponentially worse, I woke up on the 6th with a wicked attack of vertigo. If you have never had this – you don’t want to know. Suffice it to say that it feels bad.

Craig had to stay home from work to care for Gav and tried using his typical Method Man methods to keep Gavin hydrated. Without success, I noted with satisfaction. Not because I was happy through some weird Schadenfreude that he was not able to keep Gavin hydrated – but because someone else could fully realize how fruitless the task feels. And perhaps sympathize with the many days I’ve struggled through this alone with Bean.

The worst part of it all for me was that, for the first time in 4 years, when my baby needed me, I couldn’t help him or be there for him. I lay in bed, crying and riddled with Mum Guilt. On Friday the 7th, we agreed first thing that Gavin needed IV fluids. It had to happen. Craig took him to the hospital by himself and navigated the ER solo.

Text updates kept me informed of their progress through triage, etc. An IV was in within record time – less than two hours, woot! The staff that day saw no need to involve neurosurge in the discussion – another first, hurrah! So the boys were home by evening, Gavin considerably more perky with a full tank. And yet, the vomiting continued…until 9:30 that night.

Morning came. We were due to meet Bubby and Da at the airport at 2:00. Was all well? It was! I quickly chucked a few things in bags and we were off. As always, Bean was weak and tired for a day or so but rallied. Soon he was running along the beach, playing mini-golf, swimming and eating like a champ. Again we proved ourselves to be the 11th hour family – looking at each other and saying, “I still can’t believe we made it.” 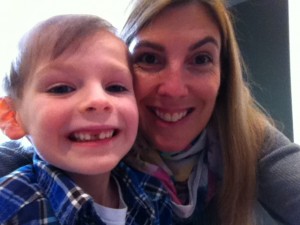 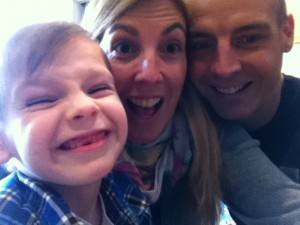 So, obviously, I haven’t found a good solution to this situation. I’ve started to explore a couple of theories – one being that CVS is somehow related to food allergies, specifically dairy and wheat. I took him to an allergist and a scratch test revealed absolutely no reaction to either of these foods. I succeeded in stressing out my child though, clearly a win!

Our last meeting with GI clinic was two weeks ago – nothing new and exciting to report there. The doctor did say though, that there is a deeply psychological component to this disease, and if we can learn to manage anxiety and triggers, we might get somewhere. Another avenue to investigate.

There is a belief about CVS that it is a form of migraine headache – and recently Gav has been complaining more of headaches when he feels nauseated. A friend in Sydney heard from her chiropractor that he’s had success in treating the condition with chiropractic adjustments! He passed on to her details of a chiropractor friend of his in Toronto who may be able to help. Which is a very circuitous way of finding a chiropractor, but anyway. I spoke with this lovely woman and organized a first appointment, and then had to cancel it because Gavin was sick. And now have another one booked – so crossing all digits we have success there.

The final piece of the puzzle is of course, the shunt and cranial defect. The shunt seems to be doing its thing. Having a hole in your head is not ideal.

To that end – breathe, breathe – Gavin’s cranial surgery will take place on April 9th. It’s looming over me and causing many anxious thoughts when I allow myself to think about it.  Knowing that he will be in pain and have to spend time in the ICU again hurts me. But I remind myself of how much this magical child has overcome in his short years on Earth. We will probably be in hospital for 4-5 days and would love visitors when Bean is feeling up for it. I am trying to think beyond this surgery, to when his head will be whole not holey and he will no longer have to wear a protective helmet in the playground. This will be huge.

One response to “March 20th”