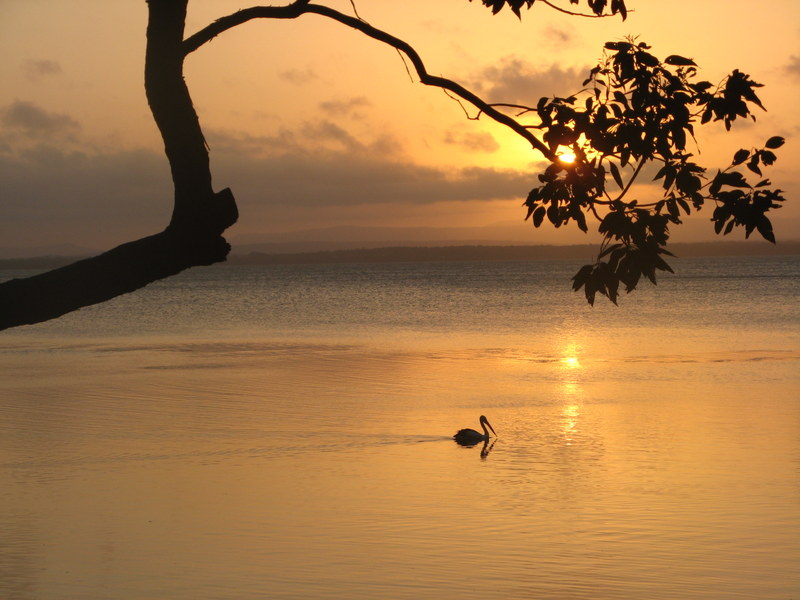 In the weeks leading up to our December 19th departure, I managed to insert the fact that we were going to AUSTRALIA into almost every chat that I had. And most of the time this info resulted in a response along these lines: “Oh you’re going to Australia, how wonderful. I’ve always dreamed of going there – but the flight is just so expensive. And long.” Yes, the flight is expensive. Yes, it is long.

I found myself walking away from these conversations thinking about the obstacles we throw in our own paths when it comes to realizing our dreams. As in, “I’ve always wanted to play the guitar, but I don’t have the time to learn.” or “I’ve always wanted to learn to ski but I can’t afford it.  Plus I’m allergic to snow.” Our brains seem to find very good ways of procrastinating and making excuses for ourselves, which seem entirely rational to us, but have others rolling their eyes behind our backs and muttering, if you want to run a marathon just shut up and DO it already!

This is very quickly somehow turning into a self-help post – pretty soon I’ll be advising you on how to make a vision board – but this is important. A few years back, like many millions of people in the world, I was incredibly moved by Randy Pausch’s last lecture and its message of achieving your childhood dreams. Then, it made me thoughtful about identifying what it is I really want and figuring out how to do the work to make those things happen. Of course, my life got derailed by diagnosis and a lot of the time AD has been spent just trying to survive. I don’t think I need to make the point that my son having cancer was clearly not amongst my childhood dreams, but I can’t deny that living through it has changed me, strengthened me, given me courage, and given me empathy that I lacked. Wonderful gifts, all.

I am removing the phrase, “I’ve always wanted to do that, but…” from my vocabulary. 2013 is going to be about making it all happen for the Spencer-Pardeys. We’ve got big dreams and some self-constructed obstacles to knock down, but we’re off to a roaring start. 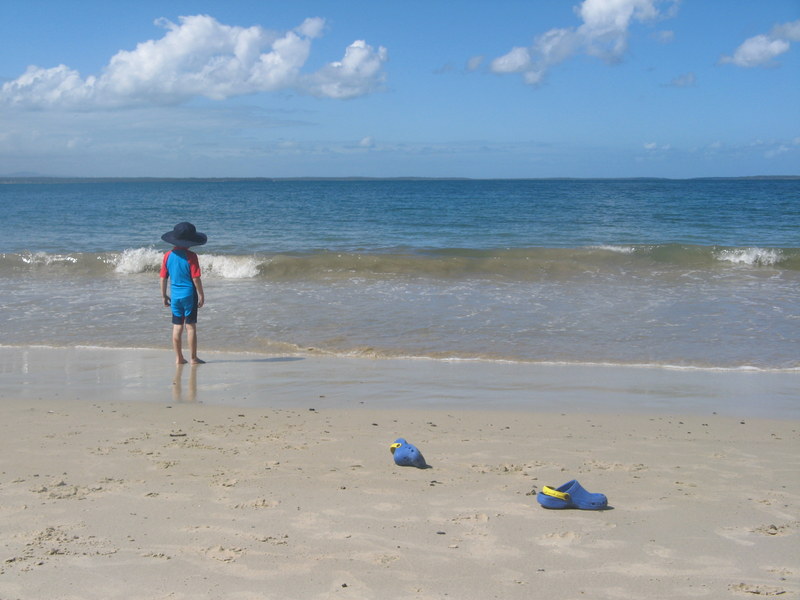 Dream #1. We made it to Australia in one piece – despite a turbulent flight to Vancouver that saw Gavin twice reaching for the barf bags and me in tears as I imagined heading straight to hospital on our arrival. Although Vancouver was writhing in the grip of (their version of) a snowstorm, the sun came out for us as Gavin jumped off the plane, perky and well back at sea level. We snuck in a quick visit with Gav’s auntie and uncles before beginning the ultra-long 14-hour leg with trepidation. But it was fine. Bean slept and watched telly and coloured. A dream-child.

Suddenly we were back in Australia. The sun’s shining in your eyes, lorikeets and similar noisy birds zipping about overhead, and everything smells like ocean, sunscreen, frangipani and meat pies.  The day after our arrival we pulled up to our cabin at Bream Beach, got out of the car and watched, bemused, as several kangaroos bounded past. 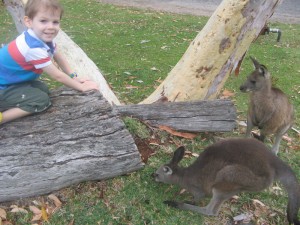 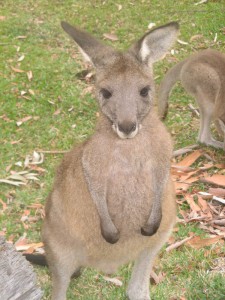 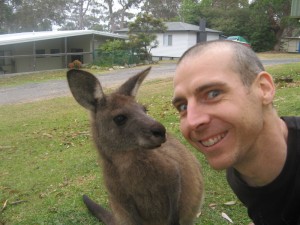 Our week on the beach was sand and swimming, fish and chips, Paddle Pops, walks, a country fair. It was watching Gavin get to know his cousins and seeing him finally realize that playing with other kids is more fun than adults. It was Christmas morning and a truck-load of presents for Bean. 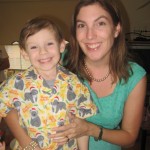 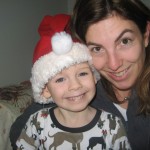 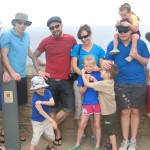 It was wildlife and a kangaroo mango-raid on Cabin M. It was jet-lagged afternoon naps and playing in the surf. It was various kid meltdowns. It was wine and eating. It was the dolphin!

Dream #2. When I was about 12, every piece of jewellery I owned had a dolphin on it and I could usually be found reading books about girls who could communicate telepathically with dolphins. Swimming with dolphins was definitely, definitely on my list. The only thing was, despite all of the time I had spent in the water, I’d never had one just pop up where I was. Yes, I could very easily solve this dilemma by paying to swim in a dolphinarium at a resort, but this seems a bit contrived, no? One of the first days at the beach we noticed that a lone dolphin kept swimming by not far from shore, and if anyone went near with a boat this curious fellow would come and swim around the boat for as long as people paid him attention. Craig’s cousin Glenn was ferrying members of the family out for dolphin visits in his canoe, and I’d yet to take a turn when my brothers-in-law and I hatched a scheme to swim out to where the dolphin was cavorting and see if he would hang with us. This did mean swimming through some fairly oogy kelp, which rubbed the tummy in a most repulsive way. I almost turned back, but we persisted to the deeper water where the dolphin was. He was swimming around the boat and then came to where we were. He swam under our feet. He popped up behind us. He went away and came back. He did not telepathically offer me a ride on his dorsal fin, but he sprayed me in the face with his blowhole, which I took to mean, (in dolphin) Hi! Welcome!  See, dreams do come true!

I am hard at work on Dreams 3 and beyond. Sometimes it’s a challenge to keep on top of dream-realization when there’s laundry to be done and picky four-year-olds to feed. And motivation has an inverse relationship to the temperature outside. -14 out = motivation only to eat choccies and watch reality television.

The flip side of all this is enabling your loved ones to make their own dreams come true. This means being a happy running widow as Craig trains for his first ultra-marathon (50 MILES) in September. It also means allowing my son to sleep in a cardboard box in his room (hoping for the first and only time in life) – because he built his house in it and desperately wanted to hang it from the ceiling. Sleeping in it seemed a good compromise.

Wishing all of you out there a brilliant 2013. May all your dreams come true. 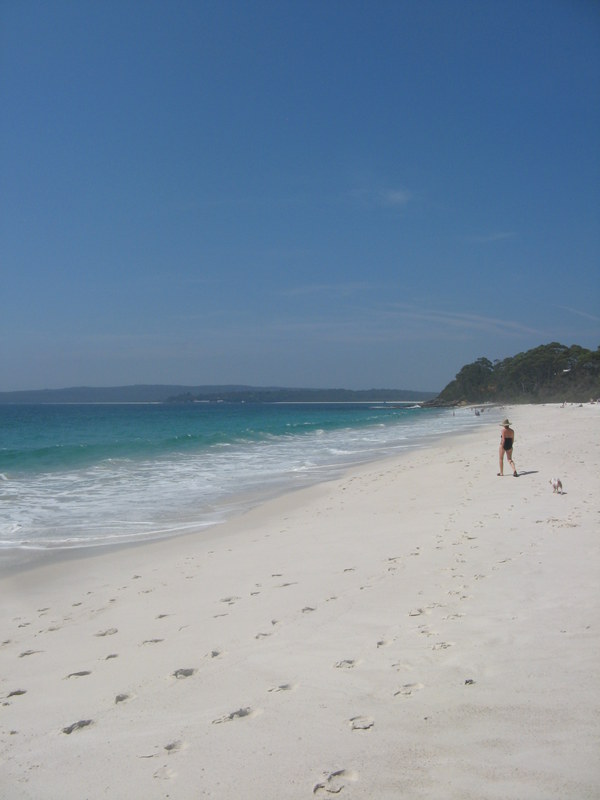