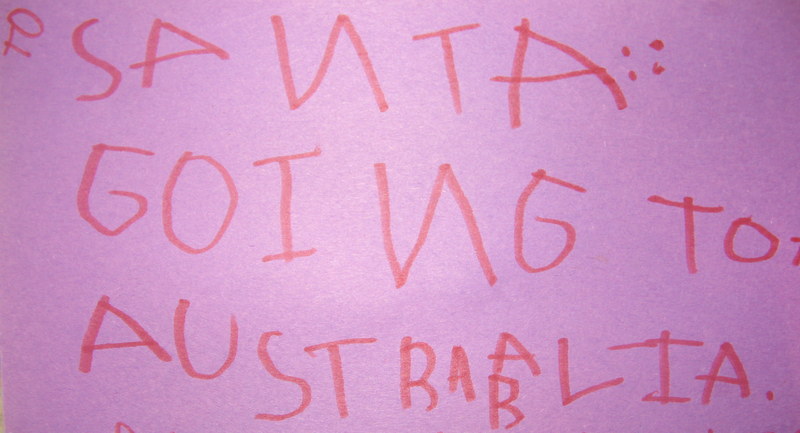 Yes, Santa, we are going to Australia, so please drop our presents off in a little cabin on Bream Beach. It’s near Jervis Bay, a few hours south of Sydney. We will be the ones dancing victoriously on the sand. Cheers!

In about two weeks, we will be celebrating Christmas on the beach, building sand-castles, soaking up the sun and enjoying ourselves Down Under for the first time in three years. Three very not easy years. Almost one year of surgeries and chemo and procedures and ICU and oxygen and NG tubes. And now we have had two wonderful years of recovery and work and love and struggle and happiness. And in all that time we have not been able to go home to Oz. We have not been able to afford it. We still can’t afford it, but sometimes you have to go anyway.

I am happy to report that we got another early Christmas present this year. We went to the hospital for Gav’s MRI on Sunday the 25th of November, and his scans were good, clear, NED. The night before the scan we were out of town at a resort attending my cousin’s wedding. (Congratulations Jeremy and Tara!) Bean and Daddy and I milked our stay for all it was worth with mini-golf, swimming and a big breakfast buffet before departure. I saved a wedding cupcake for Gav’s post-MRI treat – and now that he no longer has to be sedated for scans, he was pretty happy to scarf  it down after he came out of the machine.

Gavin amazed me with his fortitude. We’d told him before that he would need to have an IV, and he was frightened but stoic. We decided to forego any pre-poke freezing, creams, sprays, etc. and just go for it. The nurse was on board and ready to get it in one shot, and she did. Gav shed no tears and said, Actually, that didn’t really hurt. My wonderful boy.

He went off with Daddy and DVDs for his scan and promised me to “lie as still as a statue.” For some reason, for this scan, I wasn’t in my usual state of distress. I had a good feeling. I felt that all would be well. I knew that all would be well, but I feared saying so, worried that I would bring down some universal hex on my boy.

I got the all-clear call two days later. There is no feeling that can compare to knowing, with complete certainty, that everything is fine. It is Joy. It is Relief. It is completely indescribable.

Yesterday, we spent a few hours at the hospital in clinic. Unlike our marathon visits of yesteryear, we were only there for two hours. The hospital never fails to amaze and irritate in equal measures. Before heading up to clinic, Gav and I ate our lunch together in the hectic cafeteria. Seeing all those babes and kids in wheelchairs, with their IV bags and tubies, always saddens me and grounds me too. I kissed my darling’s sparsely-haired head as he munched a PB & J sammie, knowing that after clinic I was going to take him out of there and head home to our normal life, but many of those little ones I was seeing had to stay, for perhaps days or weeks or always.

After eating, we went up to the first landing of the spiral staircase and tossed all of my spare change in the fountains, as we usually do, making wishes. We have done this so many times. I remember when he couldn’t walk up those stairs, or stand for long enough to throw his coins, or reach over the top of the railing to do so. Yesterday he marched up with confidence, without holding Mummy’s hand, and threw his coins over asking, What should I wish for? I told him to wish for whatever he wanted. I know my wishes – for him to be well, and to live, and grow, and thrive. To be able to cheer at his graduations and dance at his wedding. For our guardian angels to watch over him. That fountain has made my wishes come true. So far. So I will keep throwing my coins in there, believing that this and all the other highly superstitious and ridiculous things I do make the difference for us.

Two years ago, right now, Gavin was in the ICU and almost didn’t make it out. For us, Christmas will always be the time that we got the miracle we begged our world to pray for. All of you, out there, joined us in prayer and sent your most positive thoughts streaming in our direction. You sent cards, packages, crayons, stickers, toys, fantastic artwork, photos. Many of you brought food. I ate those meals so conscious of the love with which they had been made and cried while I ate them. After re-reading my posts from those dark days, I still shake my head in wonder that Gavin’s lungs were healed, and he was extubated, and he left the ICU, and he learned to walk again, and he recovered from the need for oxygen, and he began to eat again.

Now, 2 years on, my kiddo is running, jumping, leaping. Climbing on the top of the couch and learning to swim. Riding a scooter and doing somersaults in gymnastics class. Yes, there are times he doesn’t appear to be as graceful as other children his age, but we aren’t all born swans. If I catch myself feeling sad about his hair or other minor details, I pull myself up and deliver a sharp, little lecture. I remember that he is doing brilliantly in his class and that he often drives me nuts with his endless chatter.

I remember that we are going to Australia in NINE days.

3 responses to “A Clear Moment”